On International Nurses Day and the 200th birthday of Florence Nightingale (12 May 2020), Kendra Felisky of Marcuson Consulting celebrates the actuarial skills of one of the world’s most famous nurses. Florence Nightingale – A Pioneer of Data Visualisation and Handwashing… oh, and that nursing thing.

It’s a situation familiar to all actuaries. You know there are poor results but you are having trouble convincing the powers that be to take action. So what do you do? First of all, you go to the data for verification, but how best to use and present that data to get your point across? Luckily, these days we have Excel, PowerBI and loads of other options to accumulate, aggregate and format our data into beautiful charts and graphs.

But Florence Nightingale didn’t have any of those tools. She also had an intransigent British government, and public, to convince that things needed to change in medical care for soldiers and army hospitals. How was she going to do that? We all know the familiar tale of the Lady with the Lamp wandering through the corridors of the miserable and dirty hospital in Scutari during the Crimean War providing comfort to the wounded, sick and dying soldiers. What does this have to do with data visualisation?

Yes, Florence Nightingale is widely regarded as the founder of modern nursing. But she actually did so much more, and was a pioneer in so many ways. Florence was born in 1820 and was expected to be a traditional Victorian upper-class housewife. However, she was very bright and quickly felt restricted by the lack of education available to women, even upper-class ones. Luckily, she was able to travel. While in Egypt, she believed that she was being called to serve society through nursing. After attending a nursing school in Germany, she came back to the UK to run a hospital in London. Then she was asked by a family friend to organise a group of volunteer nurses to go to the Ottoman Empire after word came back to Britain about how horrific the conditions were there for the soldiers. And the rest is history…. Or is it?

The Lady with the Lamp was also the lady who conducted pioneering work as a statistician during a time when women were not valued for their intellect. She used her passion for statistics to save lives of soldiers during the Crimean war, and do ground breaking work in data visualisation that continues to be influential to this day. She did this by collecting data. Lots and lots of data. Data on things that people didn’t think were important, like how many people died, the causes of death, where they died. And she worked out that ten times more soldiers died from illnesses such as typhus, typhoid, cholera and dysentery than from battle wounds in her first winter in Scutari. These soldiers were being killed by poor living conditions including poor nutrition, lack of supplies, stale air, and overworking of the soldier as well as lack of hygiene. And she could do something about it! When she returned to Britain in 1858, Florence published her report on Mortality of the British Army which was packed with analysis in the form of charts and tables of data collected from her time at Scutari. Some of these charts and tables had never been presented in that way before. She created bar charts, stacked bars, honeycomb density plots, 100% area plots, graphs, pie charts and a new type of pie chart called the Nightingale Rose (mistakenly referred to as the Coxcomb chart – shown below). 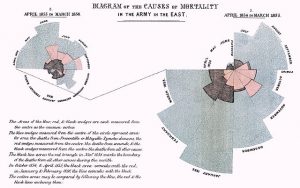 In addition, many of her findings shocked her as well as the rest of the establishment. For example, she discovered that in peacetime, soldiers in England died at twice the rate of civilians due to poor sanitary conditions— even though they were young men in their primes.

All actuaries can benefit from the way Nightingale used simple language and bold graphics to popularise her findings. She was methodical in her approach to collecting and interpreting data, presenting striking diagrams to fight for her cause. It was effective. Hygiene improved. The British government built new hospitals. Death rates were sharply reduced. And nursing became recognised as a proper profession.

As for that handwashing… years before the germ theory of disease was confirmed by Louis Pasteur and Joseph Lister, Nightingale enforced an obsessive commitment to sanitation. She, along with Hungarian physician Ignaz Semmelweis, is considered a pioneer of hand washing. She continued to be a pioneer in other ways. Florence Nightingale was the first female member of the Royal Statistical Society and an honorary member of the American Statistical Association.

But I think she also deserves to be made an honorary actuary!